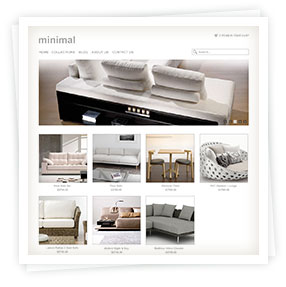 You may have noticed that things have been a little quiet here lately. That’s because we’ve been busy working on a major update to the software, which is pretty huge!

This update includes a complete re-design of the interface, with a lot of attention paid to consistency… so that once you’ve learnt how to do one thing, it’s pretty easy to work out how the rest of the interface works.

There are also a lot of additions to functionality, including the ability to manage products and orders in bulk, as well as the ability to download them.

With this new version, we can also now release the Showtime and Antiqua themes that we’ve mentioned previously. We haven’t been able to release them earlier, as they include functionality that isn’t available in the current release. There’s also a new theme… Minimal. A screenshot of the theme can be seen to the right.

We’re just working through the final testing phase, so it will probably be about two weeks. We’ll post more info here in the coming days/weeks, and send out an email to all store owners when we get closer to the date.