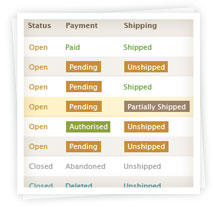 If you haven’t noticed that the “show all” link on the Orders page is broken, you’re in the minority.

We’ve received tons of emails letting us know about it. Rest assured that we know it’s broken and it will be fixed very soon.

This little glitch is because of some new features that we’re working on bringing to this screen that should make it a lot clearer when there’s an order that needs your attention.

This, along with some other tweaks should resolve a few issues we’ve seen where orders are left open, items aren’t marked as shipped, and payments not marked as processed. Hopefully it will really help people that have stores with a lot of small orders and small shipments keep on top of their workflow.